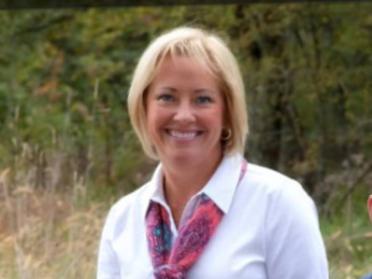 Hi, My Name is Cindy Peck.  I live in Pembroke, Kentucky.   I have been married for 17 years to the love of my life Scott and we have two awesome kids, Cody and Savannah. I have been a flight attendant with Southwest Airlines for 20 years.

I was saved as a 9 year old girl back in 1971. I certainly do remember that day but I’m not entirely sure if it was because my friends walked the aisle and I thought I should too or because the preacher had me convinced I was going to hell.  Regardless, all I remember hearing from that point on was what a sinner I was and how I needed to change but I didn’t know how.  So I gave up trying to be “good” and did what felt good to me!   From the age of 10 – 30 life was all about me and having fun.

I married Scott in August 1997 and we started a family right away.  In December 2002 I received an NIV Mom’s Devotional Bible as a gift. I carried it to church, looked up verses occasionally but it wasn’t until August 2007 that I made a commitment to read the entire Bible cover to cover.  It took me 3 1/2 years!   I think one of the reason I wanted to read it was because of many unanswered question that kept haunting  me.   After reading the bible I soon realized that so many things I had been taught I found were half truths or traditions of men handed down through the generations.  Looking back I know this wasn’t intentional and I am thankful for the seeds that were planted in my heart.

Reading Gods word was the best thing I had ever done for myself.   It created a hunger and thirst in me to know the truth.   John 17:3 says: and this is life eternal that they might KNOW thee the only true God and Jesus Christ whom thou has sent.  I thought because I said “I am a Christian and believe in Jesus’  eternal life was when I die and leave this earth.  At that point I realized I hadn’t known Jesus at all.   I had become very religious doing a lot of good work for my church.  When I took a good hard look at my heart I found myself to be self righteous, always trying to “measure up” to the standard put before me.   I had a relationship with the church and it’s members, but sadly, I did not have a one on one relationship with Jesus. That thirst and hunger consumed me as I sought out the one true God.  As I continued to read HIS WORD, he came alive in me.  I began to see subtle changes in me and my family noticed too. One of the best things I heard my son say to me was “Mom, you seem different, I think you have changed” I just smiled and said, ” yes, that is the power of Jesus”.  Finally, I had seen his Grace working in my life.  Not by my works but truly Jesus working within me.

I had to humble myself, open my mind and learn from Him.   As I began to seek to know Jesus,  doors started to open. One day I was asked “where do you think the kingdom of God is?”   In my mind, it was that place way up in the sky, where God was and where I would join him after I die or at the end of time, whichever came first.  And that is when my real journey in Jesus began.  Matthew 13:19 says when any one heareth the word of the kingdom, and understandeth it not, then cometh the wicked one, and catcheth away that which was sown in his heart.  Since I had read through the Bible I knew my walk with him was a matter of the heart, but this verse tells me the kingdom was sown in my heart!   My friend told me the kingdom had come over 2000 years ago and since I thought it was where I went when I die I was totally confused. Especially since I read in Luke 17:20-21 that the kingdom didn’t come with observation but was ‘within me’.   I felt very angry and confused we had many discussions about this as I had set out to prove him wrong and every time I thought I had it right he proved BY THE SCRIPTURES I had it wrong.   God Bless my friend for he had the patience of Job with me.

The strife on my heart was unbearable and it wasn’t until I prayed to The Lord with tears in my eyes and a heavy heart that I did not care who was right or wrong I only wanted to know the truth.  One of the main components of my Kingdom Awakening was a teachable spirit and the desire for the truth from Jesus himself.  As I studied Matthew 24 I had a supernatural experience. That was the day The Lord took the scales from my eyes and started to reveal himself to me. That was the day I realized these scriptures were spiritual and all about Jesus.  I have learned that if I seek with all my heart, soul and mind he will continue to reveal himself to me little by little.   Words can not express the joy and peace I experience now. It is so satisfying to be able to read the bible and understand it.  I don’t understand everything completely but that’s part of the fun, knowing without doubt that he will reveal it to me. I am growing in knowledge and understanding and love. My life is hid IN Christ and I intend to find as much of that life as he has grace and mercy to give it.  His kingdom is never ending and everlasting.   My prayer for everyone is to seek it out, don’t be stubborn in your beliefs and doctrine as I was but allow Jesus to show you the way.

John 5:39 KJV [39] Search the scriptures; for in them ye think ye have eternal life: and they are they which testify of me.

I am convinced that If you will seek The Lord with all your heart he will reveal himself to you for this is one of his many promises. The kingdom message Jesus brought so many years ago is still available to those who will search it out today. He called them mysteries of the kingdom not secrets and mysteries are meant to be solved.  I have found that the Kingdom message contains it ALL and you can have as much or little of Jesus as you desire.   The creator of this world is waiting on you, HE desires to reveal himself to you and to give you his kingdom. Luke 12:32 KJV. [32] Fear not, little flock; for it is your Father’s good pleasure to give you the kingdom.

LIVE each day with purpose…

BELIEVE with all your soul…